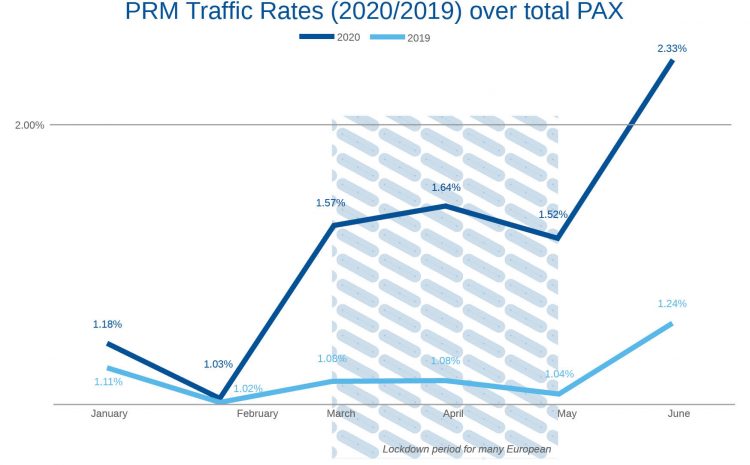 Passengers requiring assistance services in airports have demonstrated year-on-year growth since the introduction of Regulation (EC) No 1107/2006. 2020 promised to be another year of sustained growth. However, the outbreak, and ongoing repercussions of COVID-19 effectively placed the world of air travel on pause, and as a consequence the positive trend, for the first time, retracted. COVID-19 has presented unique challenges and a fundamental question: «How will COVID-19 impact PRM travel in the short, medium and long term». In an attempt to gain clarity, we must first look at the initial travel behaviour of PRMs, which presents us with the question this report addresses: «How has PRM traffic faired against the total passenger traffic in the first two quarters of 2020?

Comparing PRM traffic from January to July 2020 against the 2019 rates reveals a significant trend. January 2020 saw PRM traffic representing an overall 0.07% growth over 2019 demonstrating the anticipated PRM growth trend for the months ahead (see figure 1). February saw a stable rate (+0.01%). However, upon the outbreak, and the consequential repercussions, of COVID-19 a significant change in PRM and passengers numbers can be observed…

PRM traffic grew from 1.03% to 1.57% in March 2020 vs 2019 (representing a growth of 0.49%) – during a period when overall passenger traffic had drastically declined. By April 2020 Europe had been identified as the epicentre of the pandemic by World Health Organization. And while Governments were imposing travel restrictions PRM traffic unexpectantly grew in comparison to 2019 rates compared to overall passenger numbers. March saw a +0.49% growth, April +0.56% and May +0.48%. Although overall passenger numbers were down significantly, the rate at which PRMs were taking to the sky in comparison to overall traffic tells a story.

Historically, June has been a month of PRM growth, due largely to it being the beginning of the summer holiday season. June 2019 had demonstrated consistency with previous years as more passengers took to the sky. June 2019 PRM traffic represented 1.24% of overall volume, +0.20% of May 2019. June 2020 would become the month many airports would reopen under new conditions, a travel experience like never  before, for many, uncertainty, and risk, would remain enough reason to opt for domestic tourism over international tourism. However, a positive trend was once again unravelling. A growth of +1.09% in PRM assistance requests was experienced in June 2020 compared to the same period in 2019, a total of 2.33% of passengers taking to the sky required assisted service.